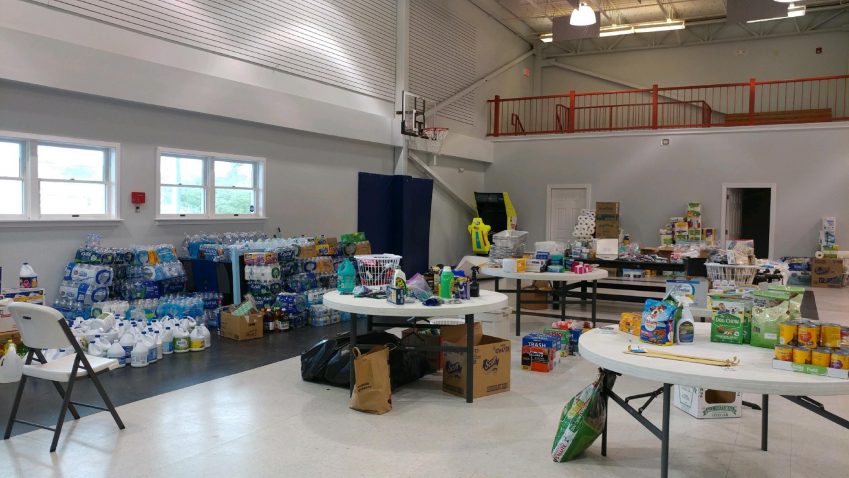 Not long after school started in Carteret County, Hurricane Florence set her sights for us. On September 13, 2018 she struck with power and fury.  The Down East community was hit hard.  The first responders were quick to help those in need and emergency collection sites were set up at all the local fire stations.  All of the volunteer fire personnel worked tirelessly in the early days after Florence to help people with much needed supplies and food.

In the weeks following the storm, The Bridge Downeast quickly became the ongoing site for Hurricane Relief.  With the help of the local community and volunteers from The Lions Club in Beaufort, The Bridge was set up as a place to get assistance.  Volunteers, Board Members and staff worked hard to unload close to 100 trucks of supplies that came to the Down East area.  Weekly trips were made to the local airport to pick up supplies that were flown in by Angel Flight in the Virginia area.  Both staff and volunteers also made sure to check on neighboring communities to be sure that supplies were being distributed where they were needed most.

By the end of September, it was clear that recovery was going to be significant and ongoing.  Susan McNamara, Executive Director of The Bridge Downeast & Deborah Van Dyken, Board Member of The Salvation Army were able to collaborate with many local churches and civic groups to raise funds to assist Down East residents in returning to daily life.  They began the Appliance Project Down East.  Again, volunteers assisted in getting washer/dryers, refrigerators & stoves into the homes of 45 families.  With the help of Warren Benton, a Salvation Army Board Member and volunteer, most were delivered & set up at no cost to the families.

A number of churches in the area had a great many volunteers visit every weekend to help meet the needs of clean-up and repair.  The Church of Jesus Christ of Latter Day Saints was able to utilize The Bridge Downeast Ramsey Center to house the volunteers over the weekend.  So, in the early weeks of October the Ramsey Center became a home away from home for those that had taken time away from their daily lives to visit the area and help out.

Overall, in the following weeks after Florence hit, The Bridge Downeast, with collaboration of The Salvation Army, The Core Sound Waterfowl Museum and Heritage Center, The Lion’s Club, and Beaufort Ole Towne Rotary Club was able to assist hundreds of families.  There is still a lot of work to be done.  Many families have had to move in with relatives and friends.  A number of families are living in only part of their homes and are still doubled up in bedrooms.  Living in “off the grid” is still a daily fact for lots of folks in the Down East communities.   Little by little, we will continue to work at getting folks Down East back to a new normal.

Only the Best Equipment and Supplies for Kids

2019 Letter to Our Supporters

The Bridge steps in to help victims of Florence